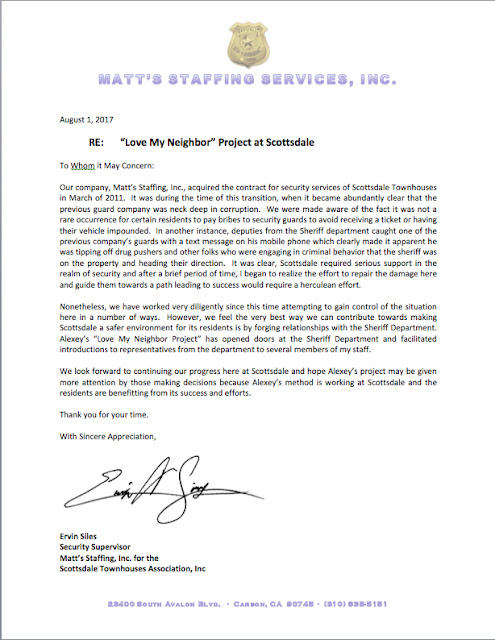 RE:      “Love My Neighbor” Project at Scottsdale

To Whom it May Concern:

Our company, Matt’s Staffing, Inc., acquired the contract for security services of Scottsdale Townhouses in March of 2011.  It was during the time of this transition, when it became abundantly clear that the previous guard company was neck deep in corruption.  We were made aware of the fact it was not a rare occurrence for certain residents to pay bribes to security guards to avoid receiving a ticket or having their vehicle impounded.  In another instance, deputies from the Sheriff department caught one of the previous company’s guards with a text message on his mobile phone which clearly made it apparent he was tipping off drug pushers and other folks who were engaging in criminal behavior that the sheriff was on the property and heading their direction.  It was clear, Scottsdale required serious support in the realm of security and after a brief period of time, I began to realize the effort to repair the damage here and guide them towards a path leading to success would require a herculean effort.

Nonetheless, we have worked very diligently since this time attempting to gain control of the situation here in a number of ways.  However, we feel the very best way we can contribute towards making Scottsdale a safer environment for its residents is by forging relationships with the Sheriff Department.  Alexey’s “Love My Neighbor Project” has opened doors at the Sheriff Department and facilitated introductions to representatives from the department to several members of my staff.

We look forward to continuing our progress here at Scottsdale and hope Alexey’s project may be given more attention by those making decisions because Alexey’s method is working at Scottsdale and the residents are benefitting from its success and efforts.

Thank you for your time.